A limited number of Ouessant sheep breeders participate in the health program provided by GD Animal Health. The sheep flocks of these breeders are certified as free from the maedi visna virus and scrapie resistant. For this certification, the purchase of breeding material from non-certified breeders results in a revocation of this health status. Maintaining this health status thus requires a careful breeding strategy combined with good collaboration among certified breeders. At the same time, this health status provides an opportunity to meet the import requirements of breeding material for countries within the European Union and countries with similar import regulations.

In addition, the sheep herds of breeders who have acquired this health status are registered with the Breeder Association for Ouessant Sheep (Fokkervereniging Ouessant Schapen), a recognized EU herdbook. These Ouessant sheep have been registered for several generations and are purebred.

The expressed and observed colourings are black, white, brown and a few recessive grey.

Breeders maintain sufficient diversity of bloodlines with seven different male lines and various ewe families that all originate from French Ouessant sheep breeding. The bloodlines are: 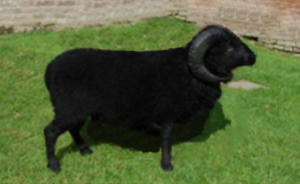 With rams from 7 different male lines, there is a wide variation of bloodlines.

In 2015, the variation of bloodlines was strengthened with brown rams from the following male lines and a white and black ram, imported from Germany, from entirely unrelated lines.

The following is a slide show of Ouessant sheep owned by Maedi Visna free and scrapie resistant certified breeders:

* Willy Gooren, “Olliemeulen”, Oploo;
For years already, Olliemeulen breeding has been well-known for white Ouessant sheep with rams from the Philipe bloodlines, white side branches from the bloodlines of Maigret and Michel. The Olliemeulen sheep herd was strengthened in 2015 with Midas van het Leudal and a white import ram from the German Kilimajaro line.

* Han Hopman, “HH”, Keijenborg;
The HH sheep herd represents some of the oldest Ouessant sheep breeding in the Netherlands with the colourings black, brown, and white and rams originating from the bloodlines of Joly Chateau Missier and a white branch from the Maigret line.

* Jan Kaper, “Veldzicht”, Beusichem;
Veldzicht breeding has mostly white and a few black Ouessant sheep from different backgrounds. The rams originate from the bloodlines of Charles, Maigret and Philipe and Michel. A Marnix 4 van de Bakkershoeve, a son from the Leudal herd, was recently incorporated into the Veldzicht breeding.

* Melkveebedrijf Giesen, “Meerhoeve”, Angeren;
For years already, the Meerhoeve Edith ewe family has enjoyed popularity, partly due to a number of breeding rams it has provided. For a few years now, they also breed with the brown colour. The rams originate from the Michel, Charles, and Joly Chateau Missier bloodlines, and brown rams out of new bloodlines from the lines of Elwin, Danny, Joris and a ram out of a brown branch of the Michel line.

* Henk Slaghuis, “Rexna”, Ressen;
With the first registration in 1980, Rexna breeding is one of the oldest in the Netherlands. The sheep herd consists primarily of black animals, although since 1990 they have also worked with a small white group. The rams descend from the bloodlines of Charles, both white and black Michel, Maigret and Pierre. In Rexna breeding, a white ram from the Joly Chateau Missier line was added as was a black imported ram from the German Serge line.

* John Stolwijk, “Raamburg”, Reeuwijk;
Raamburg breeding consists of primarily white ewes which partially trace back to HH breeding. In 2012, Raamburg breeding resulted in a grey ewe. In 2015, a grey Bouwmansgoed ewe was added. Bloodlines are from the white rams Michel and Maigret.

For more information about import/export, you can contact Frans Giesen by sending an email to: franskegiesen@hotmail.com